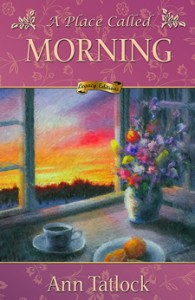 Mae Demaray’s life in an old clapboard house on a quiet Minneapolis street had been rich with the hues of security and love, beauty and faith. But that was before the March day when Mae’s young grandson died accidentally while under her care. Unable to make sense of her torn-apart world, Mae retreats from life as she had once known it. Only through an unlikely friendship and the revealing of decades-old secrets is Mae able to forgive herself and be restored to faith and family.

Reviews of this bookAnn Tatlock impressed a great many readers with her debut novel, A Room of My Own early in 1998 [BKL My 1 98]. In A Place Called Morning, Tatlock once more avoids the formulaic conventions so common to Christian fiction to tell the story of Mae Demaray, a widow in her late sixties overcome with grief and guilt for her negligence the day her young grandson was killed. Curiously, Tatlock never tells the reader much about Mae’s dead husband, concentrating instead on her sorrowful parents and a childhood friend, the retarded, good-hearted Roy Hanna, who remains in Mae’s life even into old age. This relationship is never romantic, but eventually the two live together, and while Mae is in a sense responsible for Roy, he also finds ways to take care of her. This quiet, often offbeat love story, about forgiving oneself and preparing for death, is another fine effort from Tatlock, whose star is clearly rising.
—   Booklist, starred review

Mae Demaray was a well-adjusted if somewhat cold woman with a strong faith in God until her grandson was killed in an accident while in her care. Although nobody blames Mae for the tragedy, she feels that it was her fault. As the years pass, her faith slowly crumbles, and she begins to withdraw from the world. Soon Mae’s only companion is Roy a mentally impaired man her mother had taken pity on in their youth. It is owing to Roy that family secrets are revealed, secrets that bring Mae back to the world as well as to God. Tatlock (A Room of My Own, LJ 11/1/97) follows a fine debut with yet another incisive look at family life and secrets. Reminiscent of Anne Tyler’s stories of family angst, Tatlock delivers an intelligent mix of domestic insight and Christian philosophy.
—  Library Journal