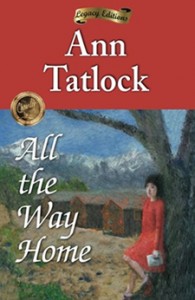 All the Way Home Discussion Questions

1. When the story opens, the narrator, Augie Schuler, is a lonely young girl searching for love and acceptance. Where does she find this initially, and where does she find it ultimately? Have you undergone (or are you now undergoing) a similar journey?

2. What kind of problems do you think Augie and her friend Sunny Yamagata might have had as interracial friends during the late 1930s and early 1940s? As a nation, we have come a long way in improving race relations, but we still have a long way to go. What can we do as individuals to help bring about unity among the many races that make up our country?

3. When Pearl Harbor was bombed on December 7, 1941, the nation of Japan became America’s enemy. When the terrorists attacked our nation on September 11, 2001, we found ourselves facing a new enemy. Read Romans 12: 14-21 and discuss the question “What does Scripture teach us to do regarding our enemies?” What makes it possible for us to pray for those who would harm us?

4. Stereotyping can bring about disastrous results. During the Second World War, all Japanese-Americans were considered dangerous. All were imprisoned, regardless of their personal devotion to America, and regardless too of the fact that many of them were citizens. Do you think we as a country are doing better in not stereotyping certain people groups today? Are we willing to see people as individuals?

5. Augie and Sunny mistakenly think they can go to church, find God “home,” and speak with Him face-to-face. Have you ever been disappointed because you went to church and found that God “wasn’t home”? Where does God promise we can always find him? Consider Psalms 95, 100, and 111.

6. In the course of the story, Augie felt let down and abandoned by many people: her birth parents, her uncle Finn, her brother Stephen, the Yamagatas. When people let us down, how should we handle our situation? How should such disappointments influence our thoughts about God? Can we trust Him not to abandon us, even though people do? What promise does He give us in Hebrews 13:5 and Matthew 28:20?

7. While living in the internment camp during the war, Sunny discovered that it was “here, in dust and dirt, O here, the lilies of his love appear!” Has God ever seemed more real to you during difficult times than during times when life is going smoothly? If so, why do think that is?

8. As an adult, Sunny changes her identity, her name, and even her appearance to become “white” and to become a civic leader in the segregated South of the 1960s. Do you think she did the right thing? Would you make similar changes to protect yourself or your family from racial prejudice or persecution? Why or why not?

9. All the Way Home derives much of its emotional power by using a child’s perspective. A child often does not readily understand the larger issues that might create problems for friends and family, but rather sees the impact more directly. What other books do you recall that use the perspective of a child to make a point?

10. In what way is the character of Howard Draper like that of Moses in the Bible? Do you think he succeeded or failed in what he wanted to do for the black citizens of Carver? What would you be willing to give up for the sake of other people?

12. During the course of the story, Augie recognizes her need to forgive a number of people in her life. Who are they, and what part does forgiveness play in tearing down the walls between Augie and other people, as well as between Augie and God?”