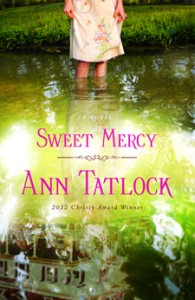 1. Eve tells her grandson Sean that if she’d known what was awaiting her in Mercy, Ohio, she wouldn’t have been so eager to leave Minnesota. When you look back at an event in your life, do you wish you could’ve known what the future held? Would you have changed the direction you were headed? What would determine that decision? Why do you think God doesn’t permit us to see the future?

2. 1 Peter 4:8. Do you believe love covers a multitude of sins as Eve’s father said? Do you more easily forgive those you love? At the same time, do you hold those you love to a higher standard than you hold others?

3. Have you ever arrived at a destination you thought would be wonderful only to discover the anticipation did not match the reality? Did you question God’s reasons for sending you to that particular place?

4. Eve sees the world in black and white. She and Jones argue about Volstead (“the law can regulate morality and make upstanding citizens out of everybody”). He tells her, “You’ve got a lot to learn about being human, missy.” We all learn that life contains a good measure of gray. Do you recall when you realized gray is the other color of life?

5. As a child Eve was aided by a nice man when she fell roller skating. Six years later she discovered his identity: Al Capone, the notorious gangster. Have you believed someone was “nice” only to learn at a later date that person was the opposite? How did you discover the person’s true identity? Did the revelation make you angry or feel disappointed at being deceived?

6. Uncle Cy was adamant his wife, Aunt Cora, would recover. He refused to go visit her. He didn’t see her before she died. Have you believed—prayed diligently—someone would be healed of his/her illness, yet they died anyway? Was your faith in God tested? Why, or why not?

7. Eve wondered if “it was possible to be happy in this world.” Times today are difficult. Innocent people are suffering. Evil is everywhere. Do you wonder where God is in all the turmoil? Do you question why He permits tragic events? Does it make you question His compassion for humanity?

8. Marcus challenges Eve as to why she went to authorities regarding the alcohol stash at Fludd’s Garage. She challenges him as to why he didn’t. There are times it can be difficult to do what is “right” when it appears everyone else is doing—or condoning—what is wrong. Do you stand alone, the target of family and friends, of society? Or do you turn the other way and ignore what’s occurring? Have you been caught “between a rock and a hard place?” What actions did you take to resolve the situation?

9. Jones asks Eve what her definition of “good” is. She discovers his father is the gangster O’Brannigan and Uncle Cy is bootlegging. Jones proclaims the men’s actions were/are to provide for their families. Eve realizes, “I have some thinking to do.” Have you judged someone only to discover you were wrong? Did you go to that person to apologize? What was his/her response? If you didn’t, why?

10. Eve wonders, “all the marvelous things people might be, if not for the circumstances that pulled them down.” Do you wonder how your life would be different had certain circumstances not altered the direction you were headed? Who orchestrated those circumstances? Were they choices you made or someone else made? Do you believe God has guided your paths?

11. Eve talks about Mercy as if what Cassandra says is and will be true. Eve says she’s “amazed at how different the truth of our existence was from the staged scenery we wandered through.” Have you had to live in what Eve calls a “nest of lies” due to a specific reason (i.e. alcoholism, substance use, child/spouse abuse)? How difficult was it to pretend to others that things were “fine?” Did you pretend to yourself your life was different than what it truly was? Do you have to pretend right now?

12. Al Capone’s gravestone reads, “My Jesus, Mercy.” How do you feel having read that Al Capone might have been redeemed of his sins? Have you believed someone was too evil to be saved by God’s forgiveness? Do you believe there are people so immersed in evil they have no right to Jesus’ sacrifice and saving grace? Are there people who “deserve” an eternity separated from God?

13. Eve tells Sean that after she got engaged her dream to go to college changed. Instead of college she became a pastor’s wife. Do you look back over the years—be they five, ten, twenty—to see how the dreams you once held dear changed? Regardless of how your dream changed, are you content with your life as it is now? If you’re not content, what must you do to change it? Something as simple as praying can change everything!