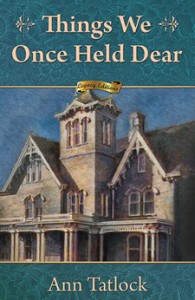 1. When the story opens, Neil Sadler has just returned to his hometown of Mason, Ohio, because his memories of the place comforted him after the death of his wife. Have you ever experienced the comfort of memories? If so, what were they and how did they make you feel?

2. When Neil related to Mary his experience of the terrorist attack on the World Trade Center, he concluded by saying, “There should be no endings.” Do you think this is a natural human reaction to death? Explain your answer.

3. While Neil had a problem with endings, Mary struggled with beginnings. She felt as though she was halfway through a life that had never really started. Do you ever feel like this? If so, what can you do that will make you feel as though you have begun to really live?

4. Central to the story is the idea of truth. What is your reaction to what each of these characters has to say about truth:

5. Bernie’s wife Rita liked to talk about finding a “teapot in a tempest.” What do you think she meant by this? Is this something you do in your own life? If so, how?

7. Denton Patch returned from the war a broken man, allowed to wander aimlessly at night “scouting for enemies.” Considering the times and the lack of understanding of post-traumatic stress disorder, do you think his family met their responsibility for him? If you had a Denton Patch in your family, what would you do differently? What would you do the same?

8. Unspoken words can cause a great deal of harm. Think of Neil’s leaving Mason in 1978 without explaining his feelings to Mary. Think too of Mary’s unwillingness to listen to what Madylyn Fricke has to tell her. How might things have been different if these characters had been willing both to speak and to listen to the truth about feelings and events?

9. Throughout the story, Mary feels estranged from her husband Dan. Chapter 11 talks about how she had once thought people started out as strangers and eventually got to know each other. But with Dan and Mary, they had started out as kindred spirits and ended up strangers. Do you think this is possible in real life? What can people do to keep from growing apart from each other?

10. When it is discovered that Uncle Bernie knew but had kept quiet for years about the true scenario behind Helen’s murder, various family members reacted differently. Some were angry while others understood his refusal to betray the confessional. Do you think Bernie did the right thing? Why or why not?

11. Which character in the story do you identify with most? Tell why.

12. Vincent McNulty, bartender and former candidate for the priesthood, says when he gave up the faith it was like a huge boulder falling off his back (Ch. 37). Think of the parable of the four soils in Matthew 13. How do you think this parable relates to Vincent’s experience?

13. Neil and Vincent talk about the Warren County time capsule and the message they would send to the future. If you could include any message in a time capsule, what would it be?

14. Neil reminds Mary of the day she danced around the May Pole in the snow. To Bernie, this was the perfect picture of hope. Do you have a similar picture of hope from your own life?

15. At the end of the story, Neil has completed a painting of the house in which he makes a point of the sky touching the earth. What do you think that means for Neil? What does it mean for you?